Ethiopia is the second most populous country in Sub-Saharan Africa and stands out for the dynamism of its economy, which is due to the Government’s strong determination to modernize the country. AFD is supporting it in the fields of energy, water, urban planning and also supports the private sector.

Turning energy into an engine for growth 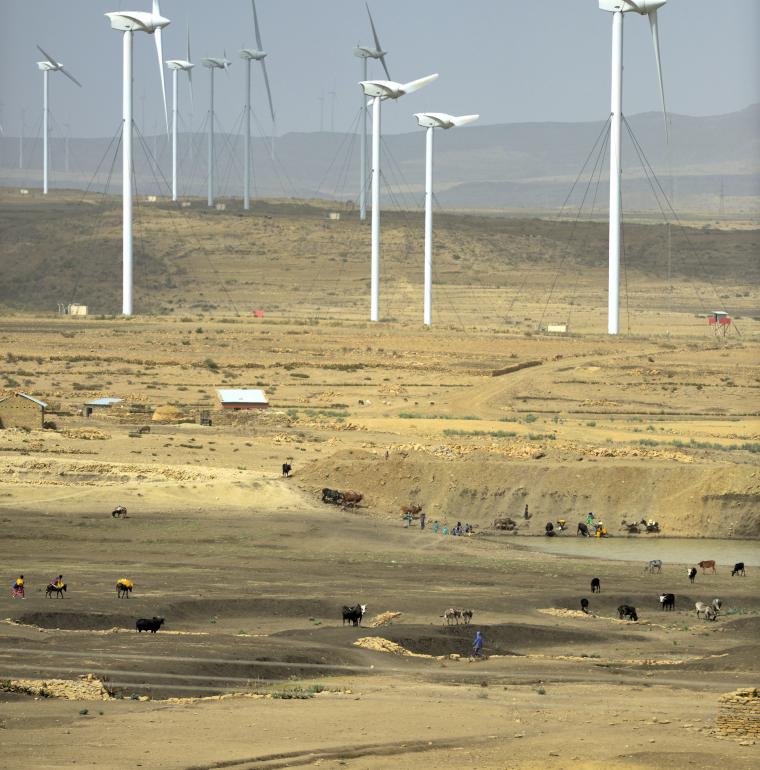 Turning energy into an engine for growth

Ethiopia has the second largest hydropower potential in Africa, with over 50 GW, and has been investing heavily in power generation since the 2000s. This has achieved results: the generation capacity rose from 814 MW in 2005 to over 2,000 MW in 2013. But the country’s objectives go well beyond its domestic needs: in the long term, it aims to increase its export of electricity to supply neighboring countries.

AFD is assisting Ethiopian Electric Power (EEP) in extending and strengthening the national power grid. We have financed the construction of four transformer stations and the installation of transmission lines around Addis Ababa. A new control center will also be built for the national power grid. It will improve distribution, reduce losses and guarantee a stable electricity supply for inhabitants.

The Government has set out to reduce drought-related risks by diversifying renewable energy generation sources. In this context, AFD has cofinanced the country’s first wind farm, in the north, near Mekele. There are two objectives: meet domestic demand and boost the country’s economic growth.

At the same time, AFD is supporting the geothermal activity in the Tendaho region.

Improving the quality of life for city dwellers 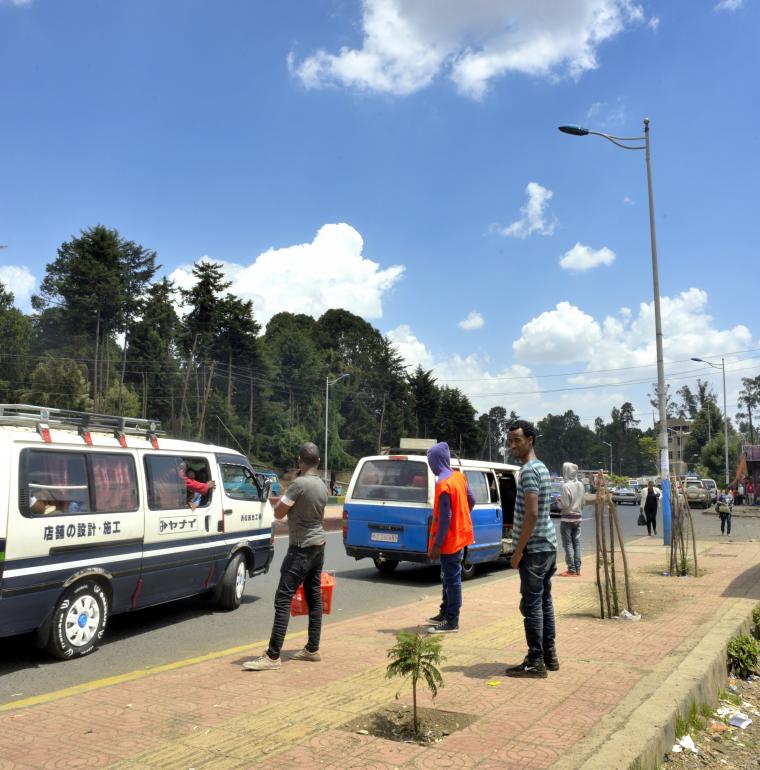 The departure point bus stop for the line on the new route has already been partly developed, Ethiopia © Didier Gentilhomme for AFD

Improving the quality of life for city dwellers

Ethiopia is experiencing a rapid urbanization rate, one of the highest in Africa. This situation leads to a number of challenges. AFD is supporting the Government’s commitment to ensuring that urban development is sustainable and harmonious.

Our strong partnership with Addis Ababa municipality is the spearhead for our action in this field and is based on the environment and mobility. We are improving waste management by financing the rehabilitation of the former landfill and the construction of the new storage facility.

In the transport sector, we are financing the first bus rapid transit (BRT) line in the capital. These rapid, regular and priority buses run on dedicated traffic lanes and are accessible to people with reduced mobility.

At the intersection of urban renewal and economic support (meat industry), we are supporting the modernization of Addis Ababa's slaughterhouse. This will improve hygiene conditions and preserve the environment for local populations.

Access to drinking water in cities is another priority for AFD. After increasing the capacity of the drinking water production plant in Addis Ababa, since 2011, we have been helping the Water Resources Development Fund (WRDF) improve water and sanitation services in the country’s secondary cities. 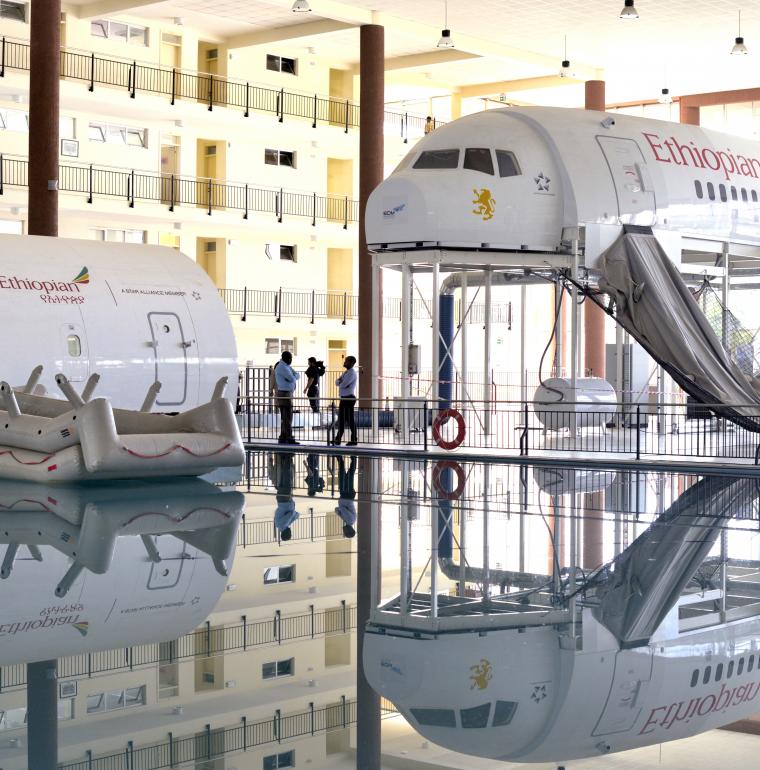 Between 2010 and 2015, AFD supported the national airline company, Ethiopian Airlines, for the extension and upgrading of its vocational training center. © Didier Gentilhomme for AFD

AFD has established a special partnership with the national airline company Ethiopian Airlines. The company is a showcase for “successful Ethiopia” and has decided to invest in the quality of its human resources and its freight activity. The objective: remain competitive and meet increasing needs in the airline sector in Africa. We have financed the upgrading of the company’s training center, which receives some 4,000 trainees a year, and the construction of a new airport terminal for freight. This will triple the capacity: this terminal will be able to receive 600,000 tons of freight a year.

AFD is supporting private and public market sectors, because strengthening the productive sector can have a positive impact on growth and create permanent jobs. It is facilitating access to credit by making its ARIZ guarantee fund available to encourage Ethiopian banks to lend to SMEs and microfinance institutions.

Ethiopia is a country with 98 million inhabitants in a territory covering 1.1 million km2 in the Horn of Africa. Its annual economic growth stood at 10.4% between 2004 and 2014, i.e. one of the highest for a non-oil producing Sub-Saharan African country. This performance is the result of a proactive policy implemented by the Government via the Growth and Transformation Plan (GTP). It aims to modernize agriculture, develop industry, strengthen and diversify exports, extend and modernize infrastructure and support social services.

AFD has had an agency in Ethiopia since 1997, but has been operating in the country since 1993. It operates through loans to the State, direct loans to State-owned companies and guarantees to facilitate access to financing (ARIZ). It focuses on the energy, water and urban development sectors, and also provides strong support to the private sector to boost growth and employment.

In 2017, the Addis Ababa agency celebrated the 20th anniversary since it opened in the country. Several events were organized during the year to celebrate this anniversary.

Ethiopia: Two Agreements and a Protocol to Support the Ongoing Economic Reforms 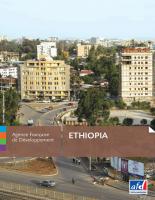 With a population of 94 million inhabitants (2013) spread over a territory of 1.1 million km2, Ethiopia is the second most populous country in Sub-Saharan Africa. It experienced a period of strong growth ...
Find out more
Research document 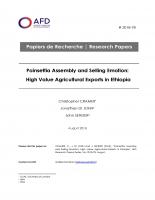 We examine how investment in high-value agriculture can help to address the balance of payments constraint on growth and the wage employment challenge in Ethiopia while accelerating structural change. ... 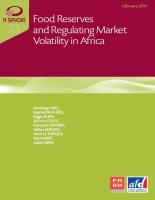 The aim of this study is to examine public food storage systems in developing countries, particularly Africa. In which context is it pertinent to set up one type of ...

The Governance of Climate Change in Developing Countries - A Report on International and Domestic Climate Change Politics in China, Brazil, Ethiopia and Tuvalu 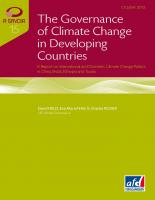 Climate change has become the most important global issue of our time and now occupies a key place on the global governance agenda. Recent attempts to create a concrete framework ...
Find out more
Research document 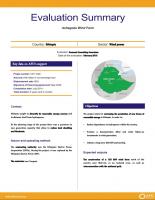 In Ethiopia, for the “Wind power” sector, the project to support the construction of the Ashegoda Wind farm was ...